Friendship is an intricate thing. We form friendships for a variety of reason, often on how we value a person. You befriend someone because they make you laugh and have the same interests as you. Other times you befriend someone because they make you think, and they challenge your worldview. Sometimes you form a friendship because that individual is vulnerable, sharing their struggles and pain. But, rarely in life you meet a friend who has all of these characteristics and virtues. That was my friend, Dale.

Dale Kompik and I met the very first day I showed up for my undergraduate degree at Moody Bible Institute –Spokane. During New Student Orientation, Dale helped lead my freshman cohort and later invited me to a house party that was for new students. When I met Dale that day in 2011, I had no idea I had met a friend that I would talk with every week for four years. I had no idea that I had met a friend who would match my aggression and effort in pickup basketball, football, and ultimate frisbee; a friend who would listen to all of my girl issues (I listened to his too); who would be my research partner and stay up with me all night in the basement of Gonzaga’s Foley Library; a friend who would not-so-gracefully lose to me in Blitz, Mario Kart, and almost every Nintendo64 game we played; a friend who would introduce me to my now wife; a friend who would ask me any question on any subject and cared to hear my opinion (and I his); and most importantly a friend who cared about my relationship with Jesus Christ and spurred me on to grow by criticizing my bad choices and encouraging me in my virtuous ones. Dale listened to me and loved me, and I him. Dale saw me as a friend who he was to help grow in virtue, because we had the same common end, God.

Dale and I’s friendship can be summarized in one story. Dale and I were both staying in Spokane for the summer of 2014, and he invited me to go kayaking one Tuesday morning. I ecstatically said yes. So, Dale and I set off to go kayak the Spokane River at Riverside State Park. We kayaked, swam, and jumped off cliffs for a solid six hours. Theology, philosophy, relationships, politics, economics, we discussed it all. The day was picture perfect. We arrived back at the Jeep, packed up, and started driving home to get some lunch. Then, Dale started laughing uncontrollably. He was laughing at how red I was, an all of sudden, it hit us. Neither of us used an ounce of sunblock on a ninety-eight-degree sunny day with absolutely no shade in which we were on reflective water for six straight hours. Needless to say, Dale and I both came down with sun-poisoning and were literally unable to leave our basements for a straight week. But, instead of wasting away that week in our respective basements, Dale and I never stopped communicating, and during that time Dale helped me with multiple issues I was facing. Dale helped me process a lot of hurt I was experiencing, while also encouraging me not to be selfish in my relationship with Stephanie (my now wife). Dale cared for my soul and my relationship deeply and continually used biblical principals to combat my selfishness; I only wish he would have cared for my skin and brought sunblock to combat the hot Spokane sun. That being said, ten days later Dale and I emerged from our basement caves finally able to enter the land of the living again. Both he and I jokingly remarked to our friends that we wished time could be turned back, so we could bring sunblock and avoid that horrible pain. But, when I think back to that experience now, I actually wouldn’t change a single thing.

My relationship with Dale is both unique and not unique. Obviously, my direct relationship with Dale is unique to me, but Dale’s friendship was a common occurrence to everyone who met him. Dale would talk with, eat with, laugh with, anyone willing to be open with him. This could be seen as he was battling his life-ending bout with pneumonia and sepsis. As Dale went through his many surgeries, amputations, and transfusion, hundreds of acquaintances, friends, and family members posted to his Facebook profile; story after story of Dale’s honesty, openness, Christ likeness, and dear friendship. And, Dale’s death yesterday only amplified the testimony of his life as a vehicle of God’s love in this world. In Dale’s death, he is proclaiming life in Christ.

As I contemplate Dale’s deep friendship, his ability to listen, challenge, and love, I cannot help but think of the reason why he was such a good friend. The wellspring of Dale’s love was the person, Jesus Christ. Jesus Christ is the great and true friend of humanity. Jesus loved mankind as a dear friend. He descended to this world and listened to us. He listened to and experienced our pain, suffering, and desires. He criticized humanity’s errors and encouraged us with his grace. And, above all Jesus was willing to die if it meant that humanity, his friends, would live in communion with God again. Dale understood this redemptive truth, and he displayed the faith he had in Jesus both in his words and his actions. Jesus Christ permeated through Dale’s countenance, character, and conversation. And, because Jesus loved Dale as a friend, Dale loved everyone as his friend. Christ gave himself to Dale, and Dale gave himself to everyone! And now, Dale is in perfect communion with his divine friend, Jesus, experiencing the very presence of the Triune God. And, at the end of days, God will resurrect his body. For, Jesus as our friend and brother has given all who believe in him his resurrection power.

More than physical resurrection, Jesus will redeem and resurrect our earthly friendships and relationships, so that they too are eternal. St. Augustine taught that Christian friendships are eternal because they are formed in the eternal Son of God, Jesus Christ! Augustine wrote in his Confessions, “Hence the mourning, if one die…all sweetness turned to bitterness…upon the loss of life of the dying, the death of the living. Blessed whoso loveth Thee God…For he alone loses none dear to him, to whom all are dear in Him who cannot be lost” (St. Augustine, Confessions, Book IV). Jesus Christ, as our friend and our cornerstone, makes our friendships eternal. Ecclesiastes famously states, “And though a man might prevail against one who is alone, two will withstand him—a threefold cord is not quickly broken.” A friendship in Jesus is a threefold cord. The love of two friends anchored in Jesus shall not be broken, not even by death! Although times of death are painful, the hope of the resurrection and union with God spurs us on to have a certain joy and peace, for we shall see our friends once again and all our tears shall be wiped away (Revelation 21:4). 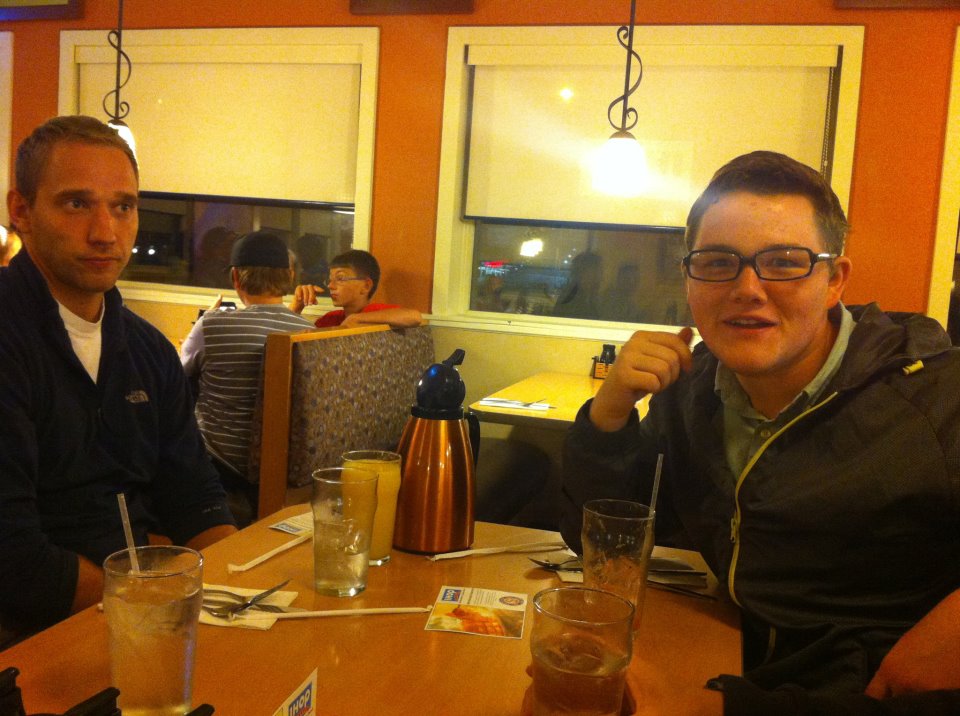 Luckily, I pocket-dialed Dale two weeks prior to his hospitalization. That last conversation we had obviously included us talking about the Detroit Lions, outdoor sports, and craft beer. Dale told me about his new endeavors of starting a business and being more involved at his church. And, after the initial hellos and catching up Dale asked, “So, how are you doing?” I answered about how work was steady and my recent move across the country had gone well, and Dale responded, “Petey, not what have you been doing, how are you doing?” I responded how I was struggling with loneliness for the first time in my life. Dale listened to me ramble on and on, and when I finished he assured me that he had experienced the same feeling before and would pray for me to find peace in Jesus. I now realize that my pocket-dial was not mere luck, but the very grace of God allowing me one last conversation with my friend, one final conversation this side of eternity.

“I am the resurrection and the life.Whoever believes in me, though he die, yet shall he live, and everyone who lives and believes in me shall never die.”

Academic: B.A. of Biblical Studies Interdisciplinary in Historical Theology from Moody Bible Institute - Spokane. Graduate & Member of the Ancient Christian Studies Honors Program under Dr. Jonathan Armstrong. My interests are Patristics and Literature in the two Oxford Movements, specifically St. Augustine, St. Gregory of Nyssa, and C.S. Lewis. Personal: Married to my beautiful wife, Stephanie Augusta, and we live in the lovely state of Washington with our twin boys August John and Abel James. Stephanie is an amazing mom and part-time nurse, and I currently work in the medical software industry at a company called, Settrax. We are part of Resurrection Church in Tacoma, WA where we serve as group leaders. My hobbies include reading good fiction by the likes of Flannery O'Connor or Fyodor Dostoyevsky and brewing beer with my friends at our co-op, Deeper Magic Brewing!
%d bloggers like this: